The PEFC United Kingdom Certification Scheme for Sustainable Forest Management (the Scheme) was first adopted by PEFC UK Ltd in 2001 and then subsequently endorsed by PEFC Council in 2002.

Since 2002, PEFC UK has incorporated a number of amendments to the original Scheme. This ensures that the current version meets the requirements of the latest standards and guides set by the PEFC Council. 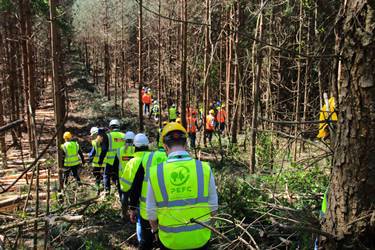 The revised Scheme is based on two national United Kingdom published documents namely, the United Kingdom Forestry Standard (the Government’s Approach to Sustainable Forestry), which was last revised in 2017, (4th edition), and the Forest Management Certification Standard, which is known as the United Kingdom Woodland Assurance Standard (UKWAS) (the Standard). UKWAS has also undergone a major review and thorough public consultation exercise between 2014 and 2016. The current version of UKWAS (UKWAS 4) has now been endorsed by PEFC Council and is effective from 1st April 2018.

The Scheme is based on the subsidiary principle of the PEFC Council regarding the establishment of national certification schemes and will permit forest producers in the UK to comply with minimum requirements ensuring sustainable forest management. Its aim is to provide consumers with guarantees that any product with a PEFC certificate or logo is derived from forest management wherein there is consistent application of principles of sustainability founded on three basic pillars of social, environmental and economic understanding.

The UK Woodland Assurance Standard (UKWAS) is a certification standard which sets out the requirements which woodland owners and managers and certification bodies can use to certify woodland management in the United Kingdom. The standard is the product of an inclusive and transparent process which has involved a balanced representation from the UK forestry and environmental community. It has been designed to ensure that it reflects the requirements of the Government’s UK Forestry Standard and through this the guidelines adopted by European Forestry Ministers at Helsinki in 1993 and Lisbon in 1998.

A Pre-approval Draft of the UKWAS 5th Edition has gained national-level approval following more than two years of work.

The draft prepared by a multi-stakeholder working group was approved at national level by the UKWAS steering group and has been submitted to FSC UK and PEFC UK who are responsible for preparing the documentation required to achieve approval / endorsement at international level.

Working Group Chair, Peter Wilson said: “I am absolutely delighted that the steering group has endorsed the Pre-approval Draft. I pay tribute to the working group members for their tireless work over the last two years and for completing this draft on schedule despite the difficulties caused by the pandemic. All decisions required consensus and it is inspiring to work with knowledgeable people representing diverse interests but all of whom focused on achieving a common goal.

“Special thanks are also due to those who shared their views over three consultation opportunities. In fact, we received a record number of responses. Building on the structural changes introduced in UKWAS 4, the main thrust in this revision has been to increase the focus on issues such as forest resilience, climate mitigation, the biodiversity crisis and the historic environment. At the same time the working group always sought to achieve an appropriate balance between economic, environmental and social aspects.

“FSC UK’s and PEFC UK’s contribution to the process was invaluable in advising the working group on their scheme requirements. It is usual for some conditions to be attached to any scheme endorsement / approval so users should be aware that some further changes might be requested by FSC or PEFC at international level, but the target is for UKWAS 5 to be confirmed and effective in April 2023.”

Copies of the Pre-approval Draft, including a version showing all the text changes, are available on the UKWAS website (www.ukwas.org.uk) alongside a Consultation Report setting out Working Group responses to the issues raised by consultees in the final round of consultation.

Documents are also available in Word format on request from the UKWAS Support Unit on ukwas@ukwas.org.uk.

UKWAS Certification Standard If you require hard copies, please get in touch at info@pefc.co.uk